At present, there are high-quality video formats, which seem to take visual communication to another level. The famous high definition formats and extra-large screen TVs have led to a new generation of video formats. In this article, we will describe the differences between HD, Ultra HD, and 4K.

What is the Resolution?

The resolution of a screen refers to the level of definition offered by television, computer or mobile screens, as well as projectors. This is measured based on the number of pixels that the screen is wide and high. For example, a high definition or HD resolution screen has 1280 x 720 pixels.

What is High Definition (HD)

The first thing we are going to do is define what HD is, so that, in this way, we can compare with the most modern formats and that are currently giving what to talk between devices of large screens.

High definition or HD by its acronym in English, is a video format that offers a higher resolution of images per screen, than the standard video format.

Thanks to this advance, the HD format allows us to see images with a high level of detail and clarity, improving the visual experience of the user of high definition screens.

What is Ultra HD?

Ultra HD is a resolution that is commonly associated with 4K resolution. However, these resolutions are different from each other. The resolution Ultra HD or Ultra High Definition refers to that resolution that reaches at least 3840 x 2160 pixels and that keeps an aspect ratio of 16: 9 on the screen.

The name “Ultra HD” was adopted in 2012 by the Association of Consumer Electronics (CEA). This screen resolution is the next step after Full HD or 1080p resolution.

In many cases, it is confused to Ultra HD resolution with 4K resolution. This confusion occurs mainly for two reasons: on the one hand, due to a marketing issue and, on the other hand, because the amount of pixels that the Ultra HD resolution has across the width (2840) of the screen is close to 4000 pixels.

The scan that uses this resolution on the screen is progressive. Unlike the 1080p resolution, this detail is omitted most of the time in the ways in which it is marketed (UHD, 4K, UHDTV).

Also Read: PC Gaming vs Console Gaming | Which One is Best

As for the transmission and consumption of the television signal or online content in Ultra HD, one of the biggest problems is the consumption of bandwidth that it requires to be able to transmit video smoothly.

The transmission must be high speed and it is necessary to have a plan that covers the transmission of this type of resolution quality, which is not always accessible to all audiences.

As for the viewing distance and screen size, if it is 40 inches and has Ultra HD resolution, the minimum distance at which a good definition could be seen would be about 80 cm.

What is 4K resolution?

The 4K designation refers to a resolution standard of 4096 x 2160 pixels that was developed by the Digital Cinema Initiatives (DCI) for use in film production, both in projection and on cinema screens.

Also Read: IPS vs TN For Gaming | Which one is best [Solved]

This resolution format is the successor of 2K (also used as a standard in cinema), which has a resolution of 2048 x 1080 pixels or 2 211 840 total pixels. Thus, the 4K resolution has four times more pixels than 2K.

Now, with the arrival of the last generation huge screens , there was an evolution in the video format, which led to consider HD as discontinued , since it greatly increases the number of pixels that the screen can display, greatly improving the video, and making it much more real even than in the HD format.

We can say then, that the main difference between HD and other modern formats, such as Ultra HD and 4K is that the latter has better quality and quantity of pixels.

Ultra HD and 4K, in general, are thought to be the same, but they are different. The first has a resolution of 3840 × 2160 pixels and a 10-bit color. While the second (DCI 4K), it has 4096 × 2160 pixels and a color depth of 12 bits. As you can see, in this sense the 4K has better quality and realism, but at the same time it is much heavier, so it requires compression, through the use of plugins to save storage space. 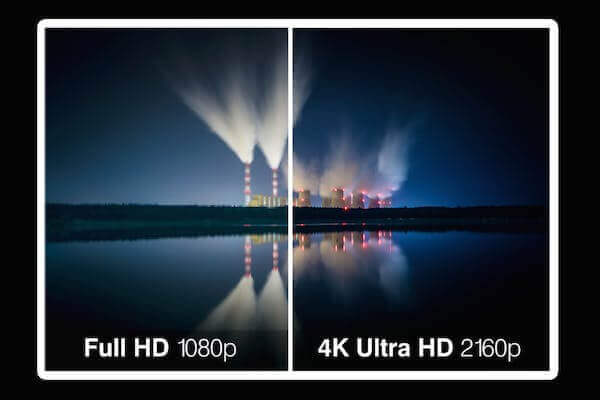 Another difference between the Ultra HD and 4K is that the Ultra HD maintains the current 16: 9 TV format, allowing you to take advantage of the entire screen size. While the 4K, requires a complete change of the format, because if not, it has black stripes at the top and bottom of the screen, wasting inches of screen.

It is for this reason, that in the market the TV screens are all Ultra HD and not 4K, which is practically not in the market, although sellers try to tell us otherwise.

You may also be interested in; Best Console Gaming Monitor

Well, it seems a bit complicated but it is merely a communication strategy. Here we leave you the table with which you will know that it is really 4K.

Note: And so while the screen does not have 4000 pixels is not real 4K.
[youtube https://www.youtube.com/watch?v=RodCjVf-5AE]

FAQs For Difference Between UHD and 4k

Why would we need 2 different resolutions? How did this happen?

It’s a long story, so as not to make this article too long, let’s just say that the movies were scanned at 2k (2048px) before the 4k arrived, so when it came to scaling the resolution, only the number doubled, becoming 4096.

On the other hand, the 2k never arrived or will arrive on television. Instead we have High Definition (Full HD TV) 1920 × 1080 and twice that horizontal resolution is 3840 (UHD), or in other words, UHD is four times FULL HD.

In summary, there are two 4k classes:

Now that you know the difference between 4k and UHD, it should be noted that normally, all (or almost all) we refer to as 4k to any of these 2 resolutions (unless it is a specific issue that requires making a difference), even the manufacturers of cameras and televisions use the term 4k to refer to any of the 2 resolutions.

Yes…! There are a lot of reasons that have led 4K technology to rise above 1080 in terms of quality. These reasons are mainly focused on factors on the ways to solve small details on the screen, especially the most delicate ones and even more so by being very close to it. And, from the point of view of production, the ability to adapt the recordings to lower resolution formats without losing an iota of its high contrast and the detail of the original.

Also Read: Response Time vs Refresh Rate in Monitor | The Higher is Better or the Lower One

So this was all the differences between HD, Ultra HD, and 4K.